Learning To Be Little Again 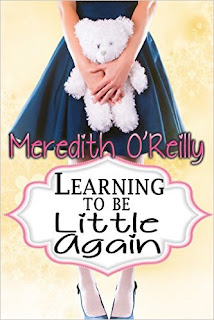 Synopsis: Twenty-four-year-old Juliana once loved being a little, until the cruelty of the man she had called daddy broke her heart and she decided to never be little again. But when she fails to take care of herself and becomes ill, a worried friend brings her to Dr. Robert O’Connor, claiming that he will understand what she needs. Juliana is embarrassed and nervous, but to her surprise, Robert gives her a teddy bear and tells her a fairy tale to help her relax. Though the exam is intimate and thorough, Juliana feels safe the whole time and hopes afterwards that she’ll see more of the handsome doctor.

My Review: I first read O'Reilly in her debut novel Little Samantha's Choice and fell in love then. I fell in love all over again when reading Learning To Be Little Again. Juliana is ninety-pounds, barely alive, and hiding in her apartment afraid to live. She had been involved in the lifestyle and had a Daddy. He hurt her terribly and left her for dead. When her friend sees how much worse she has become and still has yet to see a doctor, he brings her in to see a friend of his.

When Dr. Robert O'Connor first sees Juliana he just wants to scoop her up and take her home. He knows it won't be that easy but is determined to show her the difference between a loving Daddy and the man who abused her. Soon enough Juliana is getting back to her health but when she receives and phone call and finds out the man who abused her is out on bail, can she still remain safe?

Learning To Be Little Again shows us what happens when someone abuses the lifestyle. When you grow to trust and love someone only to have them harm you. It is also a story of hope and healing. We watch as Juliana learns the difference between Robert and her former "Daddy". I absolutely love this story and will be rereading it again.
Posted by Unknown at 1:31 PM