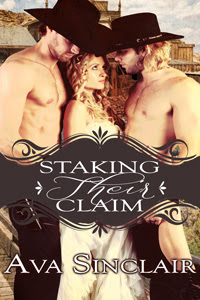 Synopsis: Jenny Beaumont’s brother Will told her countless times about his plans to follow his friend Cody Drake to the mining town of Coloma, and the innocent eighteen-year-old can’t help but romanticize the California Gold Rush. When she faces the prospect of being married off to an older man by her greedy relatives after Will’s tragic death, Jenny heads west to fulfill his dream.
In the months he has spent waiting for Will to join him, Cody has become close friends with Nigel Simms, an Englishman who recently saved his life. After he finally gets word that Will has made it to Coloma, Cody is shocked to discover that the new arrival is actually Will’s little sister Jenny disguised as a boy. Learning of his friend’s passing is bad enough, and now he’ll have to look out for Jenny as well. As far as he is concerned, protecting Jenny means taking legal custody of her, and he is pleased when Nigel agrees to share the responsibility. Both men make it clear to Jenny that she will be expected to obey them or face the consequences, and furthermore, as their ward she will be cared for like a child. Before she knows it, she finds herself being bathed, dressed like a little girl, and spanked on her bare bottom when she is naughty. But despite her embarrassment at such treatment, Jenny quickly discovers that the two men’s firm-handed dominance and loving correction awaken a fire in her that she never knew existed. Cody and Nigel didn’t plan to fall in love with the same woman, but in no time at all Jenny has captured both of their hearts. Soon they are sharing their little ward in the most intimate way possible, teaching her all the ways that a man—or two men at once—can make her blush with shame and ache with need at the same time. But keeping a beautiful young woman out of harm’s way in a rough mining town is no easy task, even for two men. Can Jenny truly trust Cody and Nigel to keep their little girl safe no matter what? Publisher’s Note: Staking Their Claim is an erotic romance novel that includes spankings, sexual scenes including threesomes, age play, anal play, elements of medical play, and more. If such material offends you, please don’t buy this book.

My Review: Jenny has lost everything. Her brother has passed and her greedy family has promised her to a wealthy man. Disguised as a man she heads to the mining town of  Coloma to stake her claim and make it on her own.

Cody cannot believe the full figured woman he runs into used to be his friend's little sister. She isn't so little anymore and he is determined to take care of her. His friend Nigel agrees to help him tend to Jenny in her time of mourning but taking care of her turns into a love that neither of them can deny.

Under the care of two handsome protectors, Jenny is determined to make the most of her fresh start. I loved Staking Their Claim because it stayed true to the time period. You didn't read about Jenny already knowing about sex when she was just a virgin. We follow her journey towards healing and love in the most unexpected places. I also loved the slight age play undertone. It wasn't heavy or just thrown in. It was subtle and didn't take from the story. I really enjoyed reading this and cannot wait for more from Sinclair.
Posted by Unknown at 5:07 PM