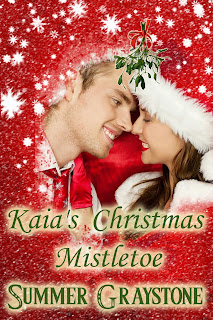 Description: When pop sensation Kaia is informed by her record label that her next collaboration will be with the infamous Oliver McFadden she’s furious to say the least. She’s supposed to hate him. He stole everything from her. And no matter how hard she tries, she can’t get it back. It was an evil thing to do and she’s resolved never to forgive him.

There was something about him though.

It was those eyes, the way he looked at her. His lips, the way his voice made her weak in the knees. He made her feel like she was the only girl in the room. Being forced to maintain a façade of friendship in public for marketing purposes, is hard enough, but a surprise kiss under the mistletoe only leaves her confused and conflicted.

Oliver McFadden has known Kaia for years, and despite her bratty attitude toward everything and everyone, he wants more than a work relationship with the maddening woman. He wants to have her over his lap, giving her the discipline he knows she needs so desperately. But that’s dangerous. If he’s wrong, he might lose her forever.

As they spend more time together, Kaia realizes that perhaps she has spent her time hating someone she doesn’t even really know. Oliver might just be the one. She can’t control herself around him and he makes her feel so special, his ways so different from any other man she’s known. But are her new feelings enough to overcome her difficult past with the man – or do they just complicate it?

This Christmas, Kaia Monroe will be opening more than presents. She might just learn to open her heart to love too.

About Summer: Summer Graystone is a college student who loves Starbucks! She lives in South California with her four legged dachshund puppy, Nikki. When she's not locked away in her classrooms, doing homework, she can generally be found tucked in the corner of the local Starbucks having a strawberry frappuccino. You can always find her with her laptop working on her latest novel that is guaranteed to make your panties wet.

She loves to hear from her readers!

The first touch on her skin wasn't a slap, but she jumped anyway. He trailed a line of kisses down over her skin, soft and gentle. He moved her hands, and then she felt his tongue slip along the cleft of her ass. Her muscles clenched and a shiver ran through her.

When he hit her she cried out, both from sharp pain, and from the release of the tension anticipation had built inside her. He'd started, and now it was only going to escalate.

The next slap hit the other side of her ass, the pain more intense this time. Oliver had a way of spanking her, of snapping his hand against her flesh that felt more like a bite than just his flesh against hers. But it was his skin touching hers, and that's what she loved, beyond the pain.

“Bend over.” Oliver's voice was rough, his breathing fast.

Oliver touched her briefly on her leg, running a finger along the crease at the top of her thigh, beneath her buttocks, then moving his fingers between her legs, rubbing against her wetness. She closed her eyes, concentrating on keeping her balance as he slipped one finger into her. For a moment he wiggled his finger, the fluttering feeling inside her making her gasp. Then he slid his finger out, moving it forward, slowly circling her clit.

Out of reflex her hips jerked forward, knees buckling slightly as something clenched deep inside her. But the effort to keep her balance forced her to hold still, even as Oliver rubbed her clit harder, fingers moving faster, and despite herself, her legs tensed again, but she managed to hold her stance.

“Good girl.” His voice was very close to her ear, and she realized with a start he was no longer sitting, but standing behind her. “Very good girl.”

Her heart swelled with love. There was just something about those words…

He struck her right cheek, much harder this time. She swayed to the left under the impact, her weight thrown to the side. With a strangled sound she dug her toes into the carpet, willing herself not to move her feet even one inch apart.

Oliver caressed her, rubbing his hand gently over her stinging skin, his other hand still buried between her legs, one finger gently thrusting into her slick wetness. The sharp pain sank into her, heating the fire that he's lit inside her. The tension in her legs lessened under Oliver's gentle touch, both from his hand on her ass, and from his finger slowly circling her clit. She breathed deeply, trying to gain control, not to let herself let go too soon, to prolong this amazing pleasure Oliver was giving her.

My Review:  This is such a sweet, hot, and short story. Kaia is a rocket determined not to give into her feelings for Oliver but when forgiveness tries to seep in, she wonders what it would be like to give into Oliver.

Oliver has knows Kaia for years. He has always felt something for her and collaborating with Kaia is the perfect way to act on those feelings.

Graystone gives us a hot story full of admiration, hope, and second chances. The sex scenes are intense and will leave you breathless. Mix all of that with the beautiful cover and you have a home run. I look forward to more from Graystone.
Posted by Unknown at 11:34 PM