The Ways Of The West 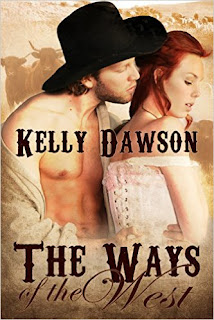 Synopsis: Orphaned by an attack on her family’s wagon train, Jessica finds herself stranded a thousand miles from Boston, the only home she has ever known. Only one man—a rough, dusty cowboy named Johnny—stands between her and the perils of the West, and he quickly makes it clear that he is ready to do whatever needs to be done to keep Jessica safe… whether she likes it or not.
When the unlikely pair stumble upon a cattle drive and they are offered employment, Johnny doesn’t hesitate to accept. But after Jessica loudly expresses her disdain for his plan and for cowboys in general, Johnny decides it is time for drastic action. After a hard, embarrassing spanking followed by a tearful apology to the trail boss, Jessica is left with both a sore backside and a strange yet undeniably powerful need to be held close and comforted by her handsome protector. With Johnny by her side—and claiming an ever bigger place in her heart with each passing day—Jessica begins to adjust to life on the trail. But a cattle drive is a dangerous place for anyone, let alone a city girl with a penchant for disobedience. If he ever wants the chance to make Jessica his wife, Johnny knows he’s going to have to take her firmly in hand before she gets herself hurt or killed. Even if it means a painful, humiliating bare-bottom strapping she’ll never forget, one way or another he’ll teach her the ways of the west. Publisher’s Note: The Ways of the West is an erotic romance novel that contains sexual scenes and spankings, including domestic discipline in a historical setting. If such material offends you, please don’t buy this book.

My Review: In the first few pages Dawson had me in tears. My heart ached for Jessica when she became orphaned and without a plan. Stranded in the unknown territory that is the West she isn't sure what she'll do. Johnny knew the moment he placed eyes on Dawson that she would be his bride someday. He'll stop at nothing to protect her and keep her safe.

I love Dawson's writing style because she focuses more on the story line than the spankings and sex. While there are some spankings and sex, it is mostly about Jessica's loss and her way towards rebuilding her future. I have grown to like the easy flow of Dawson's stories. As you read them you can feel the natural rhythm of her writing style.

Seeing Jessica's growth from bratty orphan to hard working cattle woman, I became obsessed and couldn't put this down. With Johnny's firm hand and Jessica's stubbornness to change her attitude about the hand she was dealt, it proved to be a fantastic read.
Posted by Unknown at 12:39 AM