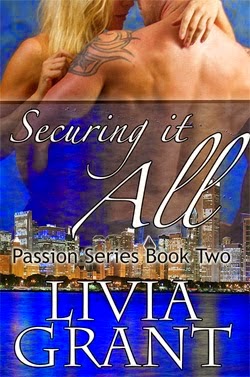 Being handed over by her husband for punishment by his friend and experienced dominant, Master Lukus, has not only revealed Brianna's deep submissive nature, but allowed Markus to finally expose his hidden past as a dominant. Now the couple revives their marriage with a new dynamic - and new rules. Markus will no longer just be Brianna's husband, but her Dom, and in the Punishment Pit where they once again found each other, Markus begins his beautiful wife's training.

Livia Grant lives in Chicago with her husband and two sons... one a teenager, the other a furry rescue dog named Max. She is blessed to have traveled extensively and as much as she loves to visit places around the globe, the Midwest and its changing seasons will always be home. Livia started writing when she felt like she finally had the life experience to write a riveting story that she hopes her readers won't be able to put down. Livia's fans appreciate her deep character driven plots, often rooted in an ensemble cast where the friendships are as important as the romance... well, almost. She writes one hell of an erotic romance.

Brianna and Markus are on the road to healing. Brianna has put her life in danger and it almost cost Brianna her marriage. She needed to be submissive but didn't bring up to Markus because he was so soft-hearted. With Brianna willing to put herself in harms way it brings out the Dom that has long been buried in Markus.

Brianna's best friend, Tiffany finds herself going down the rabbit hole. She had read novels of submissives being spanked and serving their master but can she put her fears aside and dive in? Lukus tries really hard to ignore his feelings for Tiffany. He doesn't know if he can be with her but as their relationship grows they both discover things about themselves they didn't know where there.

Grant brings us on a journey different from other erotica authors in the industry. Not only do we get to revisit Brianna and Markus but we are also getting into a new relationship. I loved that she allowed us to see what happens with Brianna and Markus rather than leaving us hanging in Wanting It All. The emotions are intense and sometimes you'll want to scream at Lukus but the story as whole is well written and brings the reader in. This one you'll have to read in one session.