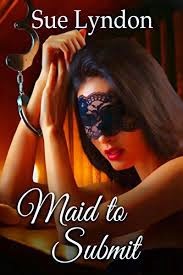 Maid to Submit is a short story of approximately 8,000 words.

Ally's all dressed up and eager to spend Halloween night with her spanko boyfriend, Mark, but on her way out the door her roommate regretfully informs her that she saw Mark having lunch with another woman. Ally's heartbroken, but she's also angry...angry enough to hurl toilet paper through all the trees in front of Mark's house, among other naughty things. She doesn't plan on being caught red-handed, but she soon finds herself being tossed over Mark's shoulder and carried into his house.

Mark insists they talk about whatever has Ally so upset, and if he has to hold her captive--or spank her--until she settles down enough to listen, so be it. He informs a stunned Ally that the busty blonde he had lunch with was...his mother! Now he's got his hands full with an apologetic French maid who is very much in need of correction. He's understanding that Ally has some trust issues because of her past, but he certainly won't tolerate such naughty, irresponsible behavior from the woman he loves. He informs her that she's to endure a thorough inspection followed by a hard spanking on her bare bottom, and that's just the beginning of her punishment.

Will Mark get his errant maid to submit to an ordeal that is sure to leave her blushing?

I loved this short story and my only complaint was that it ended too soon! Ally is super excited to surprise her boyfriend, Mark on Halloween night but on her way out the door her roommate informs her that she saw him with another woman. Armed with toilet paper timid Ally grows a pair and sets out for revenge.

Mark catches Ally trashing the front of his house and he can't fathom what got into her except that she is making a huge mess. Once Mark tells Ally the truth she can't help but be embarrassed.

I loved Ally's attitude in Maid To Submit, she was a spitfire character. Maid To Submit is a well written short that is sure to make you want more from Ally and Mark. It's easy to get into and you'll find the story over before your ready.  Fantastic read!