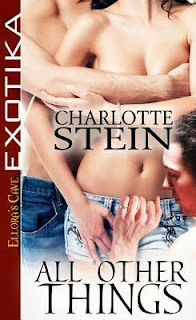 Bea’s husband Tommy is the sweetest, most gorgeous guy she’s ever met. There’s just one problem—he doesn’t seem to want to have sex with her. Or at least, he shows no interest in the kind of sex she’s craving. Kinky, torrid, passion-filled sex, of the sort a too-handsome and too-fascinating colleague at her workplace is offering.Kieran is everything that Tommy’s not—dark to his light, triple caramel swirl to Tommy’s vanilla. But Bea will not be tempted. Or at least, she thinks she won’t. Until she discovers Tommy and Kieran have been IMing each other for some time—and they haven’t been talking about innocent things.They’ve been talking about her, and more importantly, they’ve been talking about what they’d like to do to her. Together. And once Tommy’s buttons have been pushed and Kieran’s been let off his leash, anything seems possible…

I found it hard to stay with All Other Things. Bea and Tommy's relationship seems scattered and at times they are in different places. When comes to introducing Kieran into their life it seems to only scatter the plot more. The sex is hot, I just wish there would have been more communication between the characters and their thoughts.
Posted by Unknown at 9:30 PM