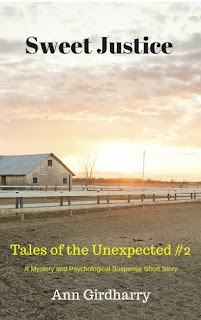 A dark tale, told from the prospective of a young woman determined to face the fear that dwells within her home...

1960s, America. Tess' mother has disappeared. Then a woman from a neighboring ranch goes missing and Tess' testimony is ignored due to her epilepsy.

Refusing to believe her mother ran away, Tess decides to play a dangerous game. Alone and in secret, she sets a trap.

As reality around her begins to reveal its true, warped nature, Tess becomes a victim of her own deception. The only way is to continue until the end. This story follows Tess as she confronts the shadow side.

Sweet Justice is a psychological suspense and mystery, and a short story of 6000 words.

Sweet Justice is the second in the Tales of the Unexpected, Mystery and Psychological Suspense series.

I had goosebumps as I read Sweet Justice. Tess has Epilepsy but it hasn't been diagnosed as that officially. Her mother mysteriously disappeared and she never felt settled with the idea that she just ran off for a better life. She knows better than to believe that.

When she catches her step-father Dirk cleaning blood out of a house claiming to be an animal's castration gone wrong she can't fight that feeling that something has gone wrong. She tries to tell the police what she saw but they think she is misguided in believing that her step-father has killed again.

Determined to take justice into her own hands she sets a trap for a dangerous game of cat and mouse. Sweet Justice although short will capture you from page one and you'll finish in one sitting awaiting the climatic conclusion.
Posted by Unknown at 1:28 AM