The Code of The West 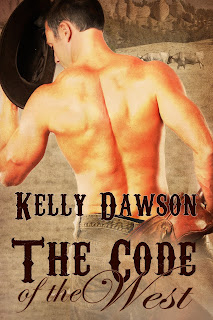 Title: The Code Of The West
Author: Kelly Dawson

In the years since the tragic death of her parents, Jedda-Lyn Cross has given everything she has to keep the family ranch running. She has grown accustomed to getting no help at all from her alcoholic brother, but when his violent, sadistic friend tries to make Jedda his wife against her will, it is the last straw.

Her attacker is the son of the richest family in the area and the corrupt sheriff stands ready to do his bidding, which leaves Jedda with no alternative but to get out of town in a hurry. With no money and no horse, her best chance of making her escape comes in the form of a soon-to-be-departing cattle drive led by the famous trail boss Wes Jordan. But a young woman has little hope of gaining employment on a cattle drive, so drastic measures are required…

Wes is none too pleased when he discovers that the new drover he hired is actually a beautiful twenty-two-year-old woman disguised as a boy, but after hearing Jedda’s story he promises to protect her. As he quickly realizes, however, that will be easier said than done. Jedda is sassy, headstrong, and in serious need of a good, hard, bare-bottom spanking, and when her reckless disregard for her own safety finally pushes him too far, Wes takes her firmly in hand.

After a painful, humiliating punishment from the handsome trail boss, Jedda is left with her bottom burning and her mind set awhirl. In spite of everything, she aches for Wes to take her in his arms, and when at last he does the pleasure of his skillful, passionate lovemaking nearly takes her breath away. But with her obsessed former suitor and his hired guns still after her, can she bring herself to accept the fact that, for a man like Wes, risking his life to protect the woman he loves is just part of what it means to live by the code of the west?


My Review:
I was glued to the pages of The Code of The West. I had to know what would happen to Jedda and if Wes would really stop at nothing to protect her. As I kept reading I laughed, cried, and rooted for Jedda. She runs away under the disguise of a 14 year old boy on the brink of becoming a man to provide for his family. She knows that she could be found out but it is a risk worth taking. Especially when her only other option is to marry the man that almost raped her.

Wes is furious when discovers that "Jed" is actually Jedda. He has a hard time being okay with the fact that he has been pushing her so hard. He falls for her quickly willing to stop at nothing to keep Cal from finding her.

I love reading Dawson's work. I know I'll be in for an adventure and on the edge of my seat. She has instilled a love of Western's in me and I can't wait to read more from her!