His Girl, His Rules 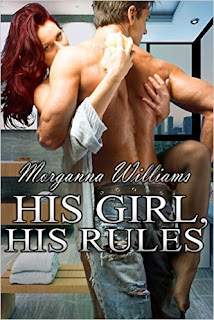 Gabriel has just been going through the motions in life since his wife’s death four years ago, but almost from the moment he sets eyes on her, he wants Glory as his own. Despite never having been taken in hand before, she responds beautifully to a good, hard, bare-bottom spanking, and his dominant lovemaking leaves her breathless. But when Glory foolishly puts herself in extreme danger, she soon discovers that naughty girls who take risks with their safety get their bottoms thoroughly punished… inside and out.


My Review:
His Girl, His Rules was fantastic read and I enjoyed getting to know Glory and Gabriel. Gabriel hasn't allowed himself to feel for anyone since he lost his wife four years ago due to cancer. Since then he has been going through the motions until he sees the timid redhead enter the club.

Glory has no clue about the sex she writes. She writes purely from her fantasies not experience. She enters the club purely with though of research only .What she doesn't expect is Gabriel to sweep her up and introduce her into his life.

With some humor His Girl, His Rules kept me in from page one and I knew i would finish it in one sitting. I love William's work and can't wait to sink into her next story.
Posted by Unknown at 4:43 PM