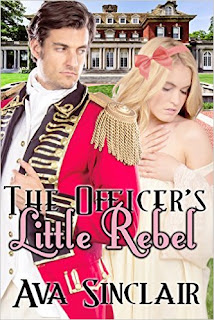 It’s a bittersweet homecoming for Major Royce Kingsley, who returns from a military campaign to find his family’s proud reputation damaged by the actions of a disinherited brother. But Royce still has his estate, his fortune, and most importantly, his honor. So when a rare moment of indiscretion on his part ends in the drunken seduction of a beautiful, innocent innkeeper’s daughter, he sets out to do the right thing and take the young woman as his wife.

Nineteen-year-old Imogen vowed long ago that she would never make the mistake her mother did by trusting a man—any man—to treat her kindly. When Royce informs her that he is going to marry her, her first instinct is to resist. But Royce is not a man to be put off from doing what he believes is right, and Imogen’s defiance merely earns her a painful, embarrassing bare-bottom spanking from the handsome officer.

Royce quickly realizes that Imogen is in desperate need of both firm-handed discipline and gentle, loving care, and he decides that she will be returned to the nursery until he is certain she is truly ready to be his wife and the mistress of a large estate. Soon enough, Imogen is blushing crimson as she is stripped bare, bathed thoroughly, dressed as a little girl, and spanked soundly whenever she is naughty.

Despite her best efforts, Imogen cannot resist her body’s utterly shameful response to her future husband’s dominance. As she is made to surrender herself to Royce ever more intimately, each quivering climax only increases her need for him to claim her completely. The peace she soon feels as Royce’s little girl is unlike anything she has experienced before, but can Imogen trust her new papa to protect her when an old enemy plots to tear her from his loving arms forever?


My Review:
The Officer's Little Rebel is a rags to riches sort of story. Imogen's step-father is an abusive man putting her out to any man willing. When Officer Royce comes to his inn to celebrate his home coming he becomes drunk. Believing Imogen to be the whore that her father states he ends up taking her virginity. As the good man he is, he decides to right his wrong and wed Imogen.

From the start Imogen is determined not to let Royce in. She will not trust him and will definitely not be marrying him. As she transforms into his little girl, she realizes that maybe he isn't like all other men.

Sinclair has developed a knack for writing historical age play. She draws you in with a wonderful back story and a firm hand. Reading Sinclair's work has given me the chance to get into historical erotica because I know I will not be disappointed. The Officer's Little Rebel is nothing short of a great story. I loved watch Imogen grow and along the way Royce learning about himself as well.
Posted by Unknown at 5:13 PM