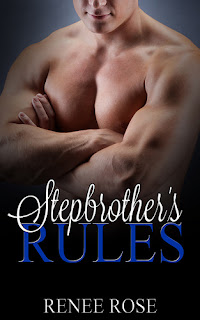 In 1957, men wore the pants and women who misbehaved were spanked...

When LuAnn gets kicked out of her college dormitory while her parents are in Europe, her older, rebellious stepbrother shows up to collect her. Since he can't leave her at home unchaperoned, he brings her to his apartment and suddenly she's playing house with the subject of all her teen fantasies.

LuAnn brings out the dominant side of him, but with it comes the desire to take care of her and nurture the sweet innocence she's been trying to cover up. He wants her for keeps, which means risking their parents' disapproval and leaving his rebellious side behind forever.

***This naughty novella was originally published as part of the Correcting the Coeds 1950's spanking romance box set.***

Publisher's Note: The book contains spanking, elements of ageplay and graphic sexual scenes. If such content offends you, please do not buy this book.

LuAnn gets kicked out of her college dorm and with her parents out of town in Europe it's up to her older stepbrother Brad to take her in. LuAnn has fantasized about Brad for as long as she can remember and she isn't sure living with him will help those fantasies.

Brad starts off their living arrangement with a long spanking. The dominant part of him wants to claim here but what will people think of such a taboo relationship?

I really enjoyed reading this and how Rose incorporated punishments that were suitable with the 1950's. From the first pages I was rooting for Brad that he would claim LuAnn even if she was naughty often. Definitely a great story to read!
Posted by Unknown at 4:55 PM